The Bristol, Creating History Since 1892

For 130 years now, the Bristol has been a popular meeting place for Vienna’s cultural and business life - and still is. Artists, stars, monarchs, and business travelers appreciated the comfort, delightful service, and cosmopolitan flair of the hotel since the beginning. The Bristol Vienna was founded at the end of the 19th century and gradually expanded along the Ringstrasse until it reached its present location. Between 1916 and 1945, the hotel took up the entire front of Kärntner Ring 1-7. Author Andreas Augustin describes this elaborate process to “real-life-monopoly”.

A Place With a Captivating Story to Tell

The first on the field was Andreas Kuehrer, owner of the Restaurant Monopole at Kärntner Ring 10, who converted a residential building on the corner of Kärntner Ring 7 and turned it into a hotel. On June 26th, 1892, the former called Hotel am Ring, opened its doors to the public and was sold to Karl Wolf, a beer brewer from Pilsen, two years later.

In 1898 Kärntner Ring 3 and Kärntner Ring 5 were taken over by the hotel and rebuilt by the architects Emil Brüsseler and Gustav Wittrisch. After that, The Bristol included a total of 235 bedrooms, a large dining room, a glass-roofed courtyard with a capacity for 150 guests, a breakfast room seating 70, and several smaller public halls – as well as an electrical lift which was the first one of a kind in Vienna. The interior design includes two seats as apparently, the lifts were ‘quite slow’ and ladies in their heavy dresses appreciated the opportunity to rest their feet.

After the death of Karl Wolf, his brother Arthur Wolf took over the running business of the modern-day Bristol and made the hotel a "fashionable residence of the elite of European and American society, situated in the most central and convenient part of the city", as the Agard´s Guide of Austria was describing The Bristol. In 1913, further expansion of the hotel followed with Kärntner Straße 55 and Kärntner Straße 53 (now Mahlerstraße 2) according to the plans of Ladislaus Fiedler and Pietro Palumbo. These also included the demolition and reconstruction of Kärntner Ring 1, the oldest privately owned building near the opera. The reconstruction was carried out by Wilhelm Schallinger between 1913 and 1916. Neues Bristol was reopened in 1916. The complex reached from the Akademiestrasse to Kaerntner Strasse (Kärntner Ring 1-7). The building itself was Art Noveau, the interior design Baroque and Biedermeier. The original wings were now called Altes Bristol. Both houses were connected to each other by passageways in the basement and on the ground floor.

On February 24th in 1921 the company Hotel Bristol AG was formed. Schallinger's entry into this hotel company saw the unification of the hotels Altes Bristol and Neues Bristol. Both houses combined had 289 rooms with 402 beds and 204 private bathrooms at this time. Due to the economic crisis in 1930, the Österreichische Bank Creditanstalt became the sole owner and lead the hotel through all its ups and downs, especially the bad times during the Second World War. 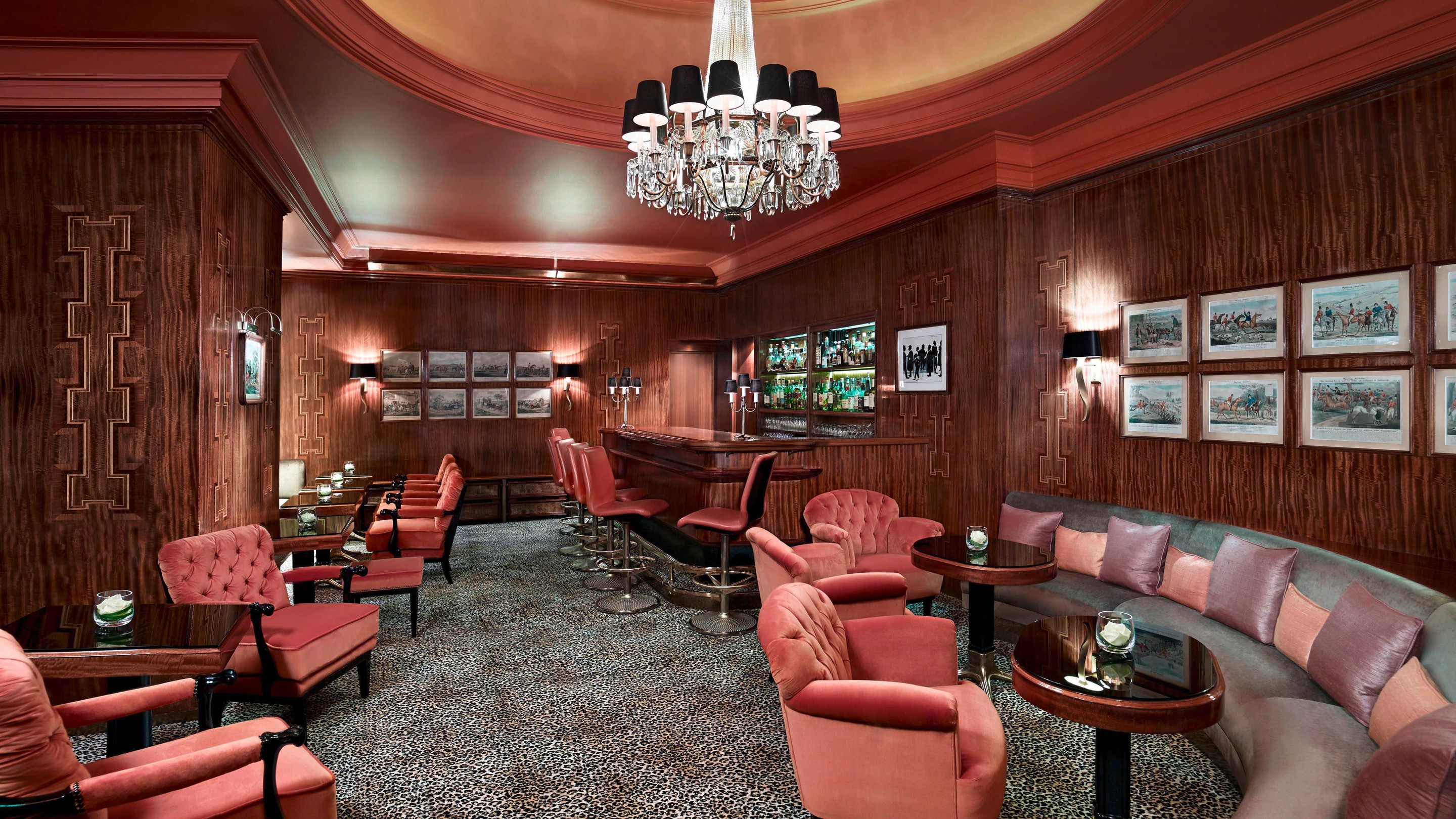 Enjoy superb hospitality over a leisurely breakfast, lunch, afternoon tea or dinner, and let us treat you to the culinary delicacies that Richard Strauss, Gustav Mahler and Enrico Caruso also enjoyed. The list of famous guests at the Hotel Bristol and the oldest American bar in Vienna is as long and as legendary as its cocktails.

In order to understand the history, the heart, and the uniqueness of The Bristol Vienna, it is important to know that the soul of the hotel is composed of the fine characters who run the hotel and take care of the guests. A strong beating heart can be found at the Bristol Bar, hidden in its "belly". The first American Bar of Vienna offers an exclusive ambiance for signature cocktails and cognacs and is worth a visit - just as Gustav Mahler or Enrico Caruso once indulged in culinary delights there. Pierre-Yves Rochon has interpreted the Art Deco style of the house in a fresh and unconventional way in the Bristol Bar, which is evident in the soft cognac-colored ceiling as well as the stylishly cheeky carpeting in a leopard pattern. The story of the bar tells itself through the countless photographs adorn the walls. Among them you will find famous guests as Richard Strauss, Leonard Bernstein as well as Herbert von Karajan and Rose Kennedy.

Another spot to feel the Viennese charm today is the Bristol Lounge. The all-day dining restaurant Bristol Lounge is one of the most popular downtown meeting places for any kind of celebration and is famous for its traditional afternoon tea. Especially opera aficionados appreciate the upscale restaurant for exclusive wining and dining before Vienna State Opera performances.  In the Bristol Lounge, Pierre-Yves Rochon re-exposed the original 1973 stucco ceiling, activated the historic fireplace, and hung eight crystal chandeliers, which were scattered in the whole building before the renovation. This is the place to enjoy ultimate comfort and luxury without pomp and circumstance in magnificent historical surroundings. 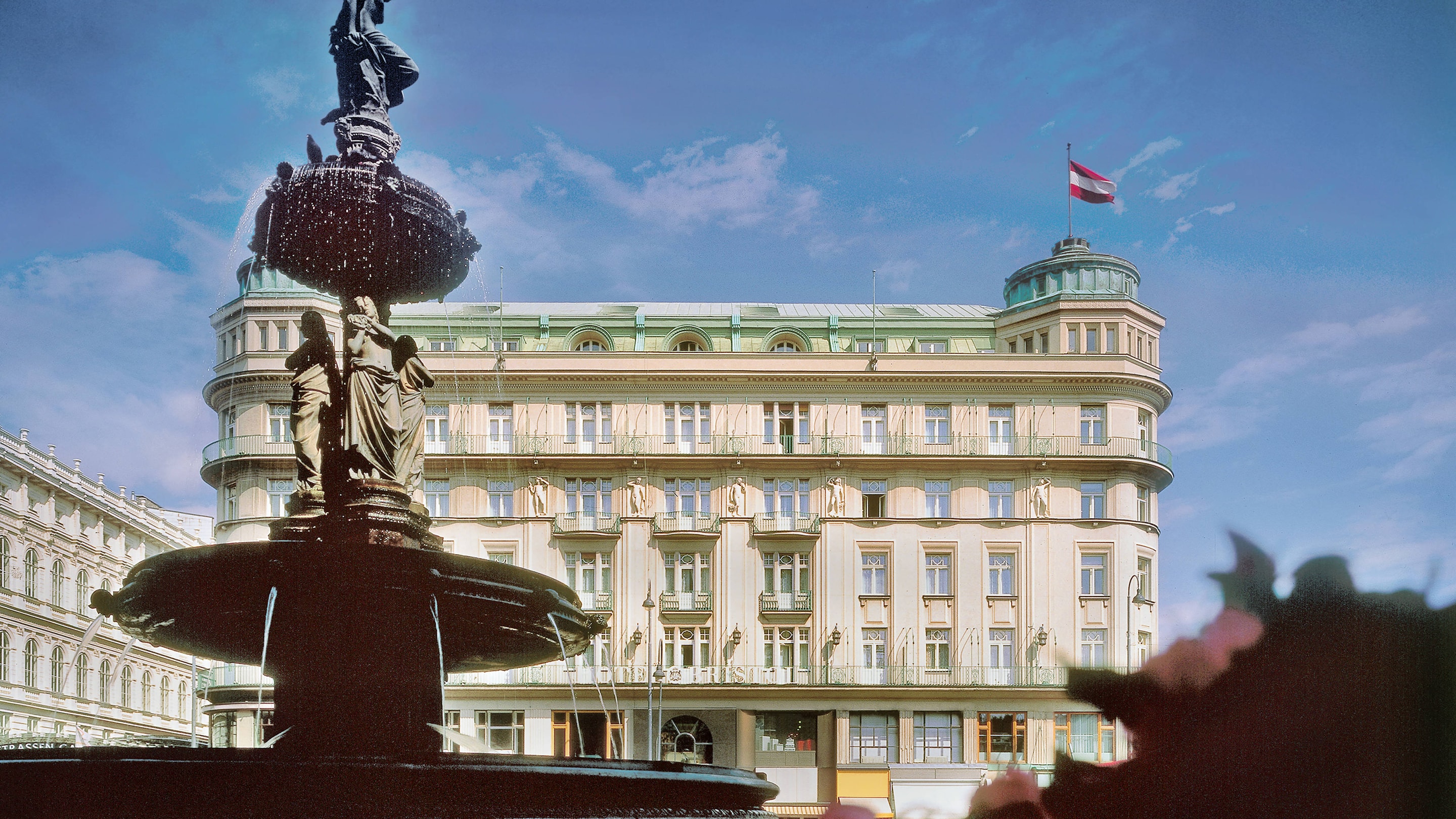 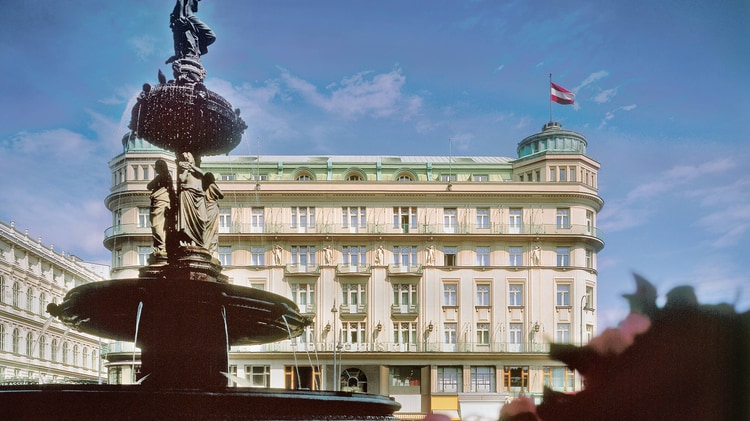 The Vienna State Opera is just a stone’s throw away and as a musical vis-à-vis is omnipresent in Hotel Bristol. Ever since the early 1900s, artists and audiences have come to the hotel after their performances to unwind in fitting style. Richard Tauber loved to stay at The Bristol and Arturo Toscanini was a regular guest.

As well as Vladimir Horowitz, a pianist from Kiev, who married Wanda Toscanini, the daughter of Arturo Toscanini. The two musicians and Richard Strauss entered their names in the guestbook on the same day. Numerous other illustrious guests from all over the world of music cherished the Bristol in the past – and they still do so today.

But The Bristol was also a setting for many famous stories. George Gershwin for example wrote his composition 'An American in Paris' in the Bristol, Catherine Deneuve shot film scenes in the Bristol Bar, and opera singer Nelli Melba was the sweet temptation for Bristol’s signature dish peach ice cream dessert- she brought the recipe to Vienna.

Several times a year, the Salon Opéra invites guests to the Hotel Bristol on the occasion of opera premieres. During a classical afternoon tea in the Bristol Lounge, stars of the premieres give insights into the current production and share interesting facts about the work and their performances. For sure an event you shouldn´t miss!

Nightly Supper of the Archduke Salvator

Dating from 1910, the artist Hans Stalzer immortalized the archduke Franz Salvator´s party in the K.-u.-K. period, which dined in The Bristol twice per month. The dining room shown in the picture is inspired by the Grill-Room on the Titanic. This painting not only depicts Salvator but many other famous personalities of the Austro-Hungarian Empire. Franz Salvator was the son-in-law of Emperor Franz Joseph, and his group included statesmen, musicians, actors, and society ladies with ties to various European courts - the usual high-class clientele of The Bristol. The painting can still be viewed at the hotel today.

World War II and Its Traces

The hotel part Altes Bristol was destroyed by bombs in 1945, when Russian, American, British, and French troops occupied Vienna. For a short period of time, Russian officers lived at the remaining part of The Bristol, in Neues Bristol. Afterwards the American forces used it as their headquarters, followed by the location of the Embassy of the United States from 1951 until 1955. After the withdrawal of the occupying forces, the banqueting hall in the basement and the oval Biedermeier salon were redesigned by the architect Otto Mayr. The living history of The Bristol is still a big part of the building. There are some tiny reminders of those days, including indentions in the brass stair railings left behind by soldiers with their rifles as they energetically exited the hotel. 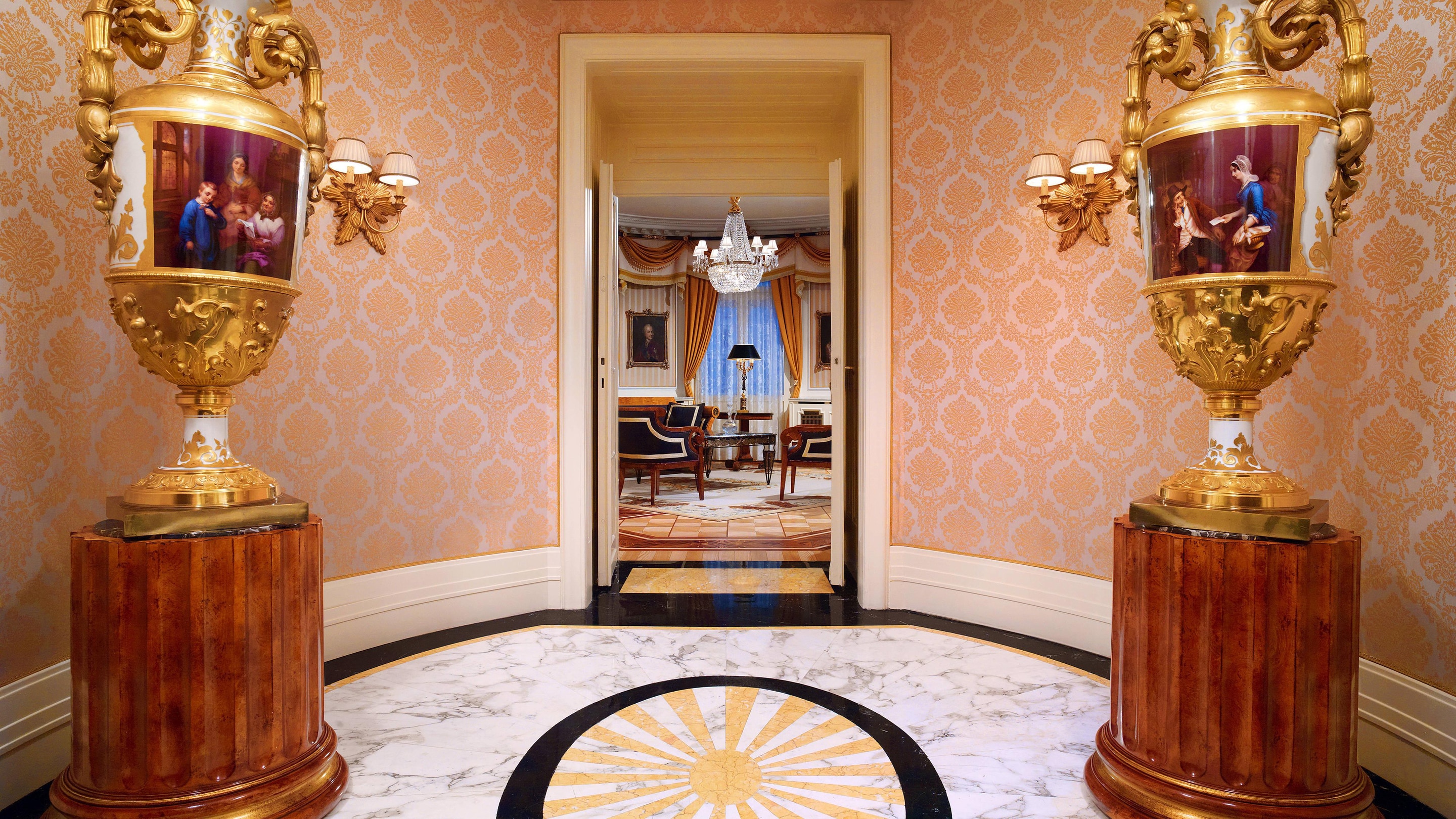 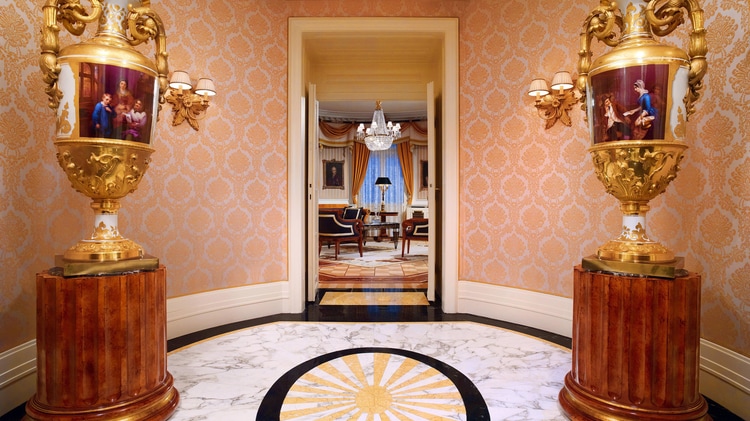 Of the total 150 rooms, one stands out, the Prince of Wales Suite, which is one of the largest suites in the country. It is located at the famous Sirkcorner vis-á-vis the Opera on the first floor. The corner was named after the German August Sirk, who used to run a shop for leather goods, sports, and hunting equipment here.

Here was the most elegant avenue in the entire empire. Around lunchtime aristocrats, important civil servants, officers, artists together with their ladies, and young lieutenants with pretty society girls would stroll down this avenue.

With 360 square meters and its own library, sauna, and gym. Luxurious and yet cozy. Romantic and yet elegant. This is how guests perceive the historically unique suite that is second to none. Priceless furniture, precious antiques, artwork, and collectors’ pieces conjure up an atmosphere of superlatives. The suite is named after Eduard VIII. "Prince Charming" himself stayed there with Wallis Simpson, the woman for whom he abdicated the throne. So apparently the Prince of Wale s losing not only his heart but also his crown at The Bristol.